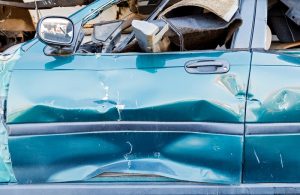 Does No Vehicle Damage Mean No Injury?
One of the most frustrating types of auto accidents to prove injury is that with little or no vehicle damage.  Minor collisions more times than not result in injury.  Here’s why…
A common misconception is that the amount of vehicle crash damage is a direct relation to the degree of occupant injury.  minor vehicle damage can relate or even be the major contributing factor to occupant injury.

Recognize that acceleration is inversely related to how long the car moves before it comes to a stop (the crush distance).  This is mathematically expressed as:

Thus, a collision with the same velocity, but with a crush distance smaller by 2.5 times will have a resulting G force 2.5 times larger.

No serious visual deformation may occur on a vehicle even though it is subjected to relatively high speeds of impact.  The whiplash injury with a great deal of litigation is most likely founded on the reasoning that if there was little vehicle damage, no injury can result.  Motor vehicle bodies or bumper-to-bumper chassis offer little or no crushing effect.  Thus, relatively high G forces can result in whiplash injury.  The use of a stiff motor vehicle bodies and chassis will also produce a spiked G force loading to occupants, even if little damage occurs to vehicle body or chassis.

Can Accident Reconstructionists Accurately Determine Occupant Acceleration After the Fact?
This is a very common scenario in low speed crashes: a patient is injured, the car shows little or no vehicle damage, and the defense expert testifies that, based on his calculations, the acceleration that the occupant experienced during the crash was minor and that injury was impossible.
The expert’s testimony may be very impressive to a jury, since his or her report seems to be very authoritative and accurate-“the occupant did not experience an acceleration greater than 3.12 Gs.”

The truth is that these numbers are not accurate-in fact, they are virtually pulled out of thin air. Understanding how the engineering expert determines these numbers is critical, because once we understand how to calculate the acceleration of a collision, we can see that it is impossible to do so accurately by simply observing photos of the cars after the crash.

Δt = Delta t, or the length of time in which the impact takes place.

Let’s just go down the list, and look at the problems that face the accident reconstructionist (AR).

First, the mass of each vehicle is relatively easy to measure. However, the cars are rarely, if ever, weighed, and usually the mass is determined by published data for each particular car model. This can be inaccurate, especially if one of the vehicles was carrying a heavy load or a number of passengers, or if the cars were modified in any way. So, immediately we have some uncertainty thrown into the analysis.

The second issue is v10, or the closing velocity of the crash. Without sophisticated equipment placed on both vehicles that would measure the speeds of each at the moment of impact, there is no way to accurately determine this number. Some accident reconstructionists simply use an estimate of what the witnesses state after the accident. A skilled engineer could examine the damage to the cars, and provide a rough estimate of the closing speed, but it would be an estimate of a range of possible speeds, and not a definitive speed. Furthermore, such analysis is seldom done on vehicles in low speed crashes. Frequently, the AR will simply begin with a low estimate of the crash speed, based upon what the at-fault driver states as the impact velocity.

Third, the coefficient of restitution also causes problems for the AR, because the only way to determine this number is to take identical cars, crash them together under conditions identical to the collision, and measure the amount of elasticity. This would be very expensive and impractical and is almost never done. The AR simply uses an estimate for this number that cannot be known for certain.

The last two portions of the equation—external forces and duration of collision—are not that important, as these variables are multiplied by a very small number:

But again, these numbers are virtually impossible to determine. What are the external forces on the vehicles? To calculate this you would have to know whether the cars were on an incline, the condition of the road surface, whether either occupant hit the brakes, et cetera. There is simply no way to accurately measure these factors. As for the duration of the collision, or the Dt, a typical collision ranges from .1 to .2 seconds, but again, this is a range of values, and provides no certainty.

The bottom line is that we cannot calculate an accurate estimate of the Dv of the target vehicle without these important pieces of information. We might be able to estimate a range of possible Delta Vs after a careful analysis by an engineer, but this would still just be a range of values. (Dv—or the “change in” velocity—is important, because it is used to calculate acceleration; it is the rapid acceleration of the occupant that can cause injury in a crash.)

Despite the fact that you cannot accurately calculate Dv after a crash, many accident reconstructionists go even further, and provide a “calculation” of peak occupant acceleration. This is impossible. First, we don’t even know what the Delta v of the collision was, and because of that, we cannot calculate the acceleration of the target vehicle. Even if we did know the peak acceleration of the vehicle, however, we would still have no idea of the occupant acceleration, simply because of the huge number of variables that come into play (i.e., seat type, seat surface material, seat angle, occupant mass, occupant position, occupant gender, head position, et cetera).

The impossibility of accurately calculating occupant acceleration was clearly demonstrated by Siegmund et al. In this very well done study, the authors performed 39 test collisions with live occupants at 8 km/h (about 5 mph). In these carefully controlled tests—using the exact same vehicle, seat and test conditions for each crash—they found that the occupant G forces ranged from 6.7 to 12.0! That’s nearly a factor of two, in a carefully controlled environment. In the real world, these differences would be magnified to such a degree, that we couldn’t even begin to predict what the occupant forces might be.

In summary, understanding the basic math behind low speed crashes is important. The old maxim, “Garbage in, garbage out,” best sums up the problem of calculating accelerations after the fact. If there is no certainty of the inputs to the equation, the result of the equation is questionable at best.

93% of Whiplash Patients Improve With Chiropractic.
by Woodward MN, Cook JCH, Gargan MF, Bannister GC
“The ‘whiplash’ syndrome is a collection of symptoms produced as a result of soft-tissue injury of the cervical spine. The accumulated literature suggests that 43 percent of patients will suffer long-term symptoms following ‘whiplash’ injury. If patients are still symptomatic after three months then there is almost a 90 per cent chance that they will remain so. No conventional treatment has proven to be effective in these established chronic cases.”
The authors of this study examined the effectiveness of chiropractic in 28 patients with chronic whiplash pain. The patients were referred to the chiropractic physician an average of 15.5 (range, 3-44) months after the accident, and were interviewed before treatment by both an independent chiropractic and orthopedic physician. The patients were assigned to one of four classification groups: A – No symptoms; B – Symptoms are a nuisance; C – Symptoms are intrusive; and, D – Symptoms are disabling. The initial evaluation placed 27 of the 28 patients in groups C or D.

“Following treatment, 26 (93 per cent) of the patients had improved: 16 by one symptom group and 10 by two symptom groups. This improvement was independent of whether it was assessed by an orthopedic surgeon or a chiropractor. In the group that had improved, 17 had stopped their treatment at the time of assessment; symptoms had recurred to a minor degree in four (24 per cent) of these patients and they were considering further treatment.”

The authors conclude that these are exciting findings, and that they merit further investigations with randomized, controlled studies.

Chiropractic “Only Proven Effective Treatment” for Chronic Whiplash
Over the last ten years, a great deal has been written on the problem of whiplash biomechanics, but little study has been done on treatment of whiplash injuries. As the authors of a new study write, “Conventional treatment of patients with whiplash symptoms is disappointing.” 1
This study examined the effectiveness of chiropractic treatment in patients with chronic whiplash pain. The mean time from injury to treatment was about 12 months.

The authors began with 93 patients with chronic whiplash pain and divided them into three groups:

Group I: patients with “neck pain radiating in a ‘coat hanger’ distribution, associated with restricted range of neck movement but with no neurological deficit.”

Group II: patients with “neurological symptoms, signs or both in association with neck pain and a restricted range of neck movement.”

Group III: patients who described “severe neck pain but all of whom has a full range of motion and no neurological symptoms or signs distributed over specific myotomes or dermatomes.” These patients also “described an unusual complex of symptoms,” including “blackouts, visual disturbances, nausea, vomiting and chest pain, along with a nondermatomal distribution of pain.”

The patients underwent chiropractic treatment for 4.1 months, with a mean of 19.3 treatments per patient. The patients were graded before and after treatment on a four-point scale that described their symptoms:

The study discusses the ramifications of the findings:

“Woodward et al2 found improvement in chronic symptoms in 26 of 28 patients (93%) following chiropractic treatment. Our results confirm the efficacy of chiropractic, with 69 of our 93 patients (74%) improving following treatment.

“Our study suggests that such a group of nonresponders does exist, represented by group 3. The defining characteristics of patients in this group were the full range of neck movement in association with neck pain, bizarre symptoms, female sex and ongoing litigation. The mean age of the group at 29.5 (16-43) was lower than that of the other two groups (mean 36.8, range 18-65).

“The results from this study provide further evidence that chiropractic is an effective treatment for chronic whiplash symptoms. However, our identification of a group of patients who fail to respond to such treatment, highlights the need for a careful history and physical examination before commencing treatment.”

“Whiplash injuries are common. Chiropractic is the only proven effective treatment in chronic cases.”

Find Us On The Map

Find Out When We Are Open